"Community Closed"
"On The LiveJournal Side"

"Due to the migration of the Livejournal site to Russian servers (bringing them under the jurisdiction of the Russian government), this United States-based community has been closed.
"A mirror will continue to operate on Dreamwidth, under the same username (Lazytown). All posts from here are archived there and new posts are welcome!
"This was a difficult decision and was not made lightly. We apologize for any inconvenience and hope that any of you still active will join us at our new home.
"Go! Go! Go! Get up LazyTown!
It's the start of a brand new day!
Things are upside-down here in LazyTown!
Adventure's just a moment away!"

Hi, guys, long time no see. I don't know if anyone looks in here anymore or if anyone will even see this, but if it helps even a little it's worth a shot.

I've just learned that Stefán Karl (the long-time face of our beloved villain, Robbie Rotten), was recently diagnosed with pancreatic cancer. The subsequent surgery has left him unable to return to work for up to a year. He and his family are going to need help with medical bills and with getting by in the coming year.

Mark Valenti (scriptwriter and lyricist for the show) has set up a GoFundMe on Stefán's behalf. The goal is $30,000, and they've raised $26,267 in just over a month. That's fantastic, but isn't quite there, and my guess is they'll need more than that in the long run. Additionally, Julianna Rose Mauriello (Stephanie, seasons 1 & 2) and Chloe Lang (Stephanie, seasons 3 & 4) came together to record a short message asking for help.
Cancer is a pain I know too well; not only have two of my friends (successfully) battled breast cancer, but my dearest friend in the world passed away this May after her cancer, thought to be in remission after her own fight, came back aggressively. I know the struggle of surgeries, recoveries, chemotherapy and procedure after procedure as complications come up. I hope with all my heart that Stefán's battle is a relatively easy one (emphasis on "relatively") and that he can return to work and a normal life as soon as possible, but in the meantime, he has not only his surgery to recover from, but chemotherapy and radiation to get through as well, and he needs all the help we can give him.
GoFundMe: Stefan Karl's Year of Healing

I assumed this livejournal would have had SOME activity but I guess not, it seems the fandom has more or less completely died here in the U.S. sadly. If your still waiting to see the episodes most are on Youtube (Including all the new ones), and the stageplays. By all means throw up a mini-review of the latest ones you have watched on here so we can have SOME sort of discussion. :)

As many of you know allready LT has shutdown production a while back and Magnus and Stefan are stepping down in their roles. The question now is, when will Turner decide to do a season 5 and who will play our beloved characters?

In the meantime here is a little doole I made when I was bored the other day. Nothing special.

According to Facebook's "Stefan Karl Stefansson Official FanPage," Magnus Scheving has stated he will no longer be playing Sportacus and that he wore the costume for the last time two days ago. They are now looking for a new actor to fill the spot.

Does this mean we get another actor for Sportacus 10, or will we have a Sportacus 11? I don't know, but I'm certainly curious!


Edit: Article by Mark Valenti on the matter. 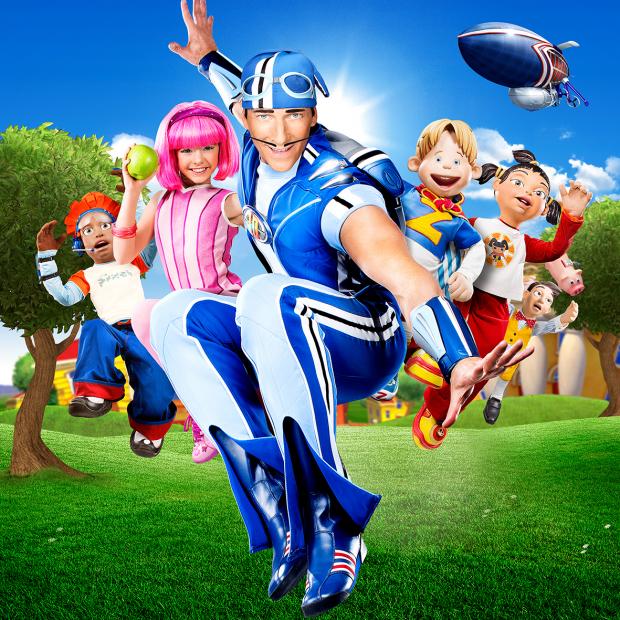 Turner Broadcasting announced that a fourth series of award-winning children’s TV show LazyTown has been greenlit.

Acquired by Turner in September 2011, LazyTown is the only global entertainment brand dedicated to promoting health in a fun and entertaining way to young children and their families.

A brand new third series of the TV show (comprising 13 new half-hour episodes) has just been produced. It premieres this spring in the UK and rolls out worldwide throughout the rest of the year.

LazyTown charts the exploits of superhero Sportacus and his resourceful young friend Stephanie as they attempt to foil the madcap plans dreamt up by arch rival Robbie Rotten to make their town the laziest in the world. Filmed in high definition and with a clever mix of live action, puppetry and CGI, the new series will be supported comprehensively both on and off-air, including through a wide-ranging licensing and merchandising rollout, high level health-related promotional campaigns and online games.

Speaking at the Nuremberg International Toy Fair, Alan Fenwick, VP, Turner CN Enterprises, said: “We’re delighted that the investment we made into LazyTown Series 3 has already brought new exciting partnerships on board. This is an iconic brand all around the world - and with today's announcement about Series 4, which is scheduled for transmission in 2014, and an ongoing content pipeline for the brand in development, we’re looking forward to announcing many more new strategic partnerships shortly.”

“LazyTown is a key element in Turner’s strategy to grow its pre-school channel brand Cartoonito into a global force,” adds chief content officer for EMEA, Michael Carrington. “We’re thrilled with the way the latest series has worked out. As well as the return of all the much-loved characters, there’s a host of exciting new stories, some cool new gadgets and a fabulous new actress in the role of Stephanie. Series 4 goes into production very soon in our LazyTown studios in Iceland and promises to be even more innovative, engaging and energetic.”

= = = = = =
I'm really surprised that there's been no discussion at all about Lazytown season 3. I knew that episodes had been filmed and were airing this year but lost track of the show. I was looking at TVguide.com and noticed the new episodes were airing on the kids' cable network Sprout.

I can't wait! What about you?

As with alot of fandoms, this one has died off because of the lack of Lazytown in the United States. Well now that the 3rd season filming has wrapped and will finally air in probably under 6 months I'm hoping fans will start to come back and get the fandom going again. There's FINALLY a new dvd release (thats not out of print) that was released by NCircle in May, and another one is set to be released the end of this month. Shinju has also started work on her Lazytown doujinshi (manga) again. Things are slowly picking up and Let's get dicussions going again! :)

My name is Mark Valenti but I write for the show under the names of my sons, Noah and Zachary. I've been with the show since '04. We shoot on a production stage in Iceland, next to a lava field.

AMA is Redditese for "Ask Me Anything." If you wish to ask Mark Valenti a question, you will need to register with Reddit.com. The AMA threads only tend to be "alive" for a few days, so don't be slow if you want to ask a question about the show! Post your questions and his replies here!

Also, as "proof" he was who he said he was, Mark Valenti posted a photo of himself and Stefán Stefánsson (Robbie Rotten), taken in December 2011.

Update: I posted some questions and Valenti answered them right away. See first reply post for the questions/answers.

Come on guys! Post some questions and show your enthusiasm for the program!

Great news from The Official Page for LazyTown: A new Stephanie has been chosen and filming of new episodes started yesterday (Monday, April 30, 2012)!!

Here's the lovely young lady taking the honor of being our new Stephanie, Ms. Chloe Lang:

Reports are the first day of shooting went great. Don't know about you guys, but I can't wait for the new season!!

LazyTown is headed back to the States!